The Republic of Liberia (since 1847) was started by citizens of the United States as a colony for former African American slaves and their free black descendants. Following its legacy during slave times, Liberia championed other African nations to work towards independence. The small country was one of the first to sign the League of Nations, and thereafter the United Nations Charter. In addition, Liberia was very involved in the formation of the Organization of African Unity (1963, replaced by the African Union in 2002).

After 1989, a prolonged period of civil war broke out in Liberia. The war stripped Liberia of the power and prestige that it previously held, and the country descended into chaos and anomy, leaving 200,000 people dead. After a number of coup d’état’s and unstable government regimes it became clear that Liberia was going to need some help to get back to a place of stability.

During that period of civil war, several organizations intervened, the first being ECOWAS (Economic Community of West African States) as well as ECOMOG (Economic Community of West African States Monitoring Group) – which at one time brought in the largest presence of peacekeepers in the world. Much later these organizations were followed by UNDP (United Nations Development Program) and UNHCR (United Nations High Commission for Refugees) which responded to trouble in several areas of the country, especially near the borders with Sierra Leone. After the war subsided more organizations came to Liberia’s aid such as FAO (Food and Agricultural Organization), WHO (World Health Organization) and UNICEF (United Nations Children Fund). Their main focus was to help Liberian refugees to find their way back to Liberia.

The United Nations plays an important role in Liberia, maintaining a calm civil life and promoting justice. Liberia, as in several other African nations, struggles with the integration of traditional justice systems with the constitutional justice systems that are dominant in the global trading world, in the international court systems, and that are at the core of modern statehood.  A long-term goal of organizations such as UNDP and UNHCR is to help establish a more solid legal and judiciary system. Part of this involved the training of judges, police officers and the military.

The United Nations Millennium Development goals were a proposition that received much skepticism on the part of several African member states. They reasoned that the goals reflect the needs and values of Western countries rather than developing nations. At the end of 2015 a panel of three people (one of which includes Liberian president Ellen Sirleaf Johnson) will review the millennium development goals as they relate to African nations. These nations plan to enact change by declaring their stance in The Post 2015 Development Agenda, presenting the united African perspective. President Sirleaf has been asked to lead this group, thereby allowing Liberia to reclaim a strong voice in international affairs.

There is fear, both in the international community, and in Liberia itself, that the country may plummet back into civil war. This fear is reiterated in the daunting presence of peacekeepers in white trucks equipped with their blue helmets, and gives the feeling of imminent violence. Seeing these trucks all over the city acts as a constant reminder of the tragedy that Liberia has faced in the past. Just this year, the United Nations Security Council decided to extend the United Nations Mission in Liberia (UNMIL) until September 2014. These blue helmets and white trucks may bring calm, but they don’t bring justice by themselves. 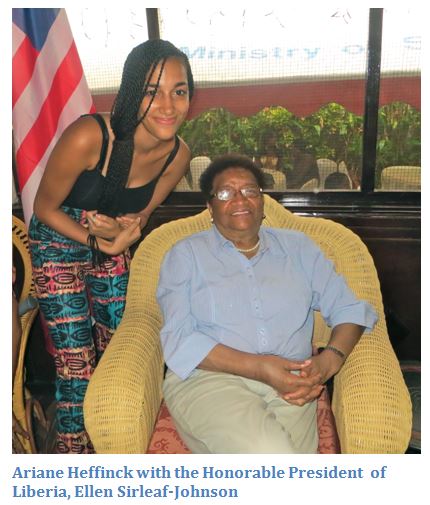 During my time in Liberia (I stayed with family) my older brother reflected on all the soldiers and warlords that were roaming the country raping and killing civilians in the most brutal ways, and who are now the same people we see walking in the streets as if nothing had ever happened. This is both scary and intriguing. Does the pursuit of justice in Liberia remain incomplete? The impression I have is that Liberians want to do whatever they can to leave the war in the past; as is evident in their lack of support for the persecution of their former president Charles Taylor for crimes committed during the war. In Liberia there is little that resembles the reconciliation committees of South Africa and Rwanda.

The quest for justice is overmatched by a quest for peace and calm. I think that time is a healer of sorts, but that will imply a continuation of the UN Peace Keepers on the ground and in the daily lives of Liberians.  In the meantime, good economic and social development in terms of jobs, education, health care and cultural evolution is a sure way for the government to eventually create a new political and stable order.